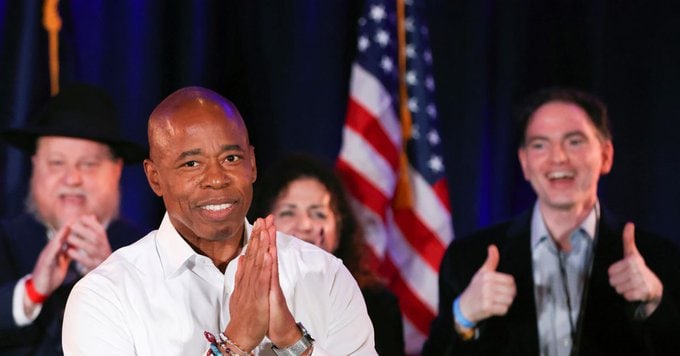 Eric Adams was voted in to become only New York’s second black mayor this week as he outpaced competing Republican Curtis Sliwa in the mayoral race.

Eric Adams garnered a 72.8% majority win on Tuesday to become the next mayor of New York. Though Adams’ campaign was primarily focused on fighting crime and pushing for a business-friendly environment, he held some positive views on cryptocurrencies. After securing the Democratic Party ticket in June, he promised that if elected, he would turn New York City into a Bitcoin hub and now he has an opportunity to fulfil the same.

During an interview on Bloomberg radio on Wednesday, the new Mayor referenced Miami Mayor Francis Suarez’s MiamiCoin, which he said is “doing very well”. Adams noted that he planned “to look in the direction to carry that out.” He also promised to look into the issues impeding the growth of Bitcoin and other cryptocurrencies in the city, in line with his intent to create a business-friendly city.

“We’re too bureaucratic, too expensive, and too difficult to do business. Our agencies, they go into businesses looking for ways to penalize or fine them. We’re changing that atmosphere altogether; we’re going to become a business-friendly city.”

Miami’s Francis Suarez has been one of the more progressive politicians when it comes to cryptocurrency. His South Florida municipality became the first municipality in the US to allow citizens to channel contributions via CityCoins, MiamiCoin in this case, from around mid-September. CityCoins is an open-source protocol where users mint and invest in city tokens. Users that mint their tokens on the protocol earn a certain percentage of it, and the rest goes to the city. In Miami’s case, users get 70% while the city holds onto the remaining proportion.

The initiative carved a path towards success as by the end of that month, city officials confirmed the city had gained about $7.1 million from the endeavour. Further, Suarez said he sees Miami gaining up to a tune of $60 million, which is money he says will be used to tackle societal issues.

Adams retired from the New York Police Department in 2006, becoming NY senator in 2007. Six years later he was elected to become Borough President in Brooklyn – an area that has now seen an approximated 356% hike in tech startups over a ten-year period. His latest win could well be a new awakening for crypto when he takes office as the mayor of America’s largest city on 01 January.

KLAY is up by more than 5% today

Solana, the coin of the rising sun: See how and where to buy now
University of Kentucky men’s basketball team to benefit from FTX sponsorship deal
Comment