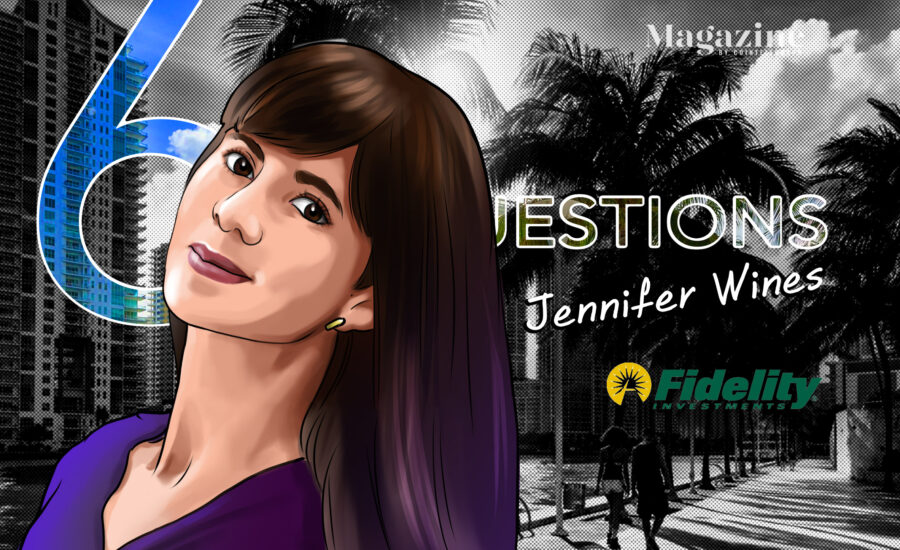 We ask the buidlers in the blockchain and cryptocurrency sector for their thoughts on the industry… and we throw in a few random zingers to keep them on their toes! This week, our 6 Questions go to Jennifer Wines, vice president of Fidelity Private Wealth Management.Jen grew up between Mexico, Canada and the United States. Academics brought her to Boston, where she attended law school and passed the bar exam. Jen started her career at Goldman Sachs Private Wealth Management and later transitioned to JP Morgan Private Bank. She is currently vice president of Fidelity Private Wealth Management. She holds a Certified Private Wealth Advisor designation from the University of Chicago Booth School of Business. Additionally, Jen is a founding, advisory member of [email protected], a community of impact-driven leaders and change makers. She met this group of women during her visits to Davos during the World Economic Forum, where she focuses on philanthropic initiatives. Further, she contributes thought leadership via Forbes Business Development Council. 1 Does it matter if we ever figure out who Satoshi really is or was?It doesnt matter, until it does. In other words, it may become material if/when we find out who Satoshi is/was.In the meantime, not knowing who Satoshi is/was is interesting for the adoption of Bitcoin (BTC) because it provided a neutral starting point for adopters to co-create the Bitcoin narrative and use case as a decentralized collective.I imagine Satoshi must be watching this anthropological experiment unfold, somewhere in the world. 2 What does decentralization mean to you, and why is it important?Decentralization, to me, means the distribution of power. There are lots of reasons why decentralization is important, but the one general point Id like to mention here is that it invites everyone to participate in whatever is being decentralized. This ends up activating more people and potential than is possible with centralization. 3 Which people do you find most inspiring, most interesting and most fun in this space?I find the mental workings of Balaji Srinivasan, Michael Saylor and Robert Breedlove most inspiring, most interesting and most fun in this space. I appreciate the theoretical and philosophical discussions of crypto, and these guys just crush it.Balajis predictive abilities are otherworldly. Saylors application of thermodynamics to Bitcoin is pure brilliance. And Breedloves What is Money? philosophical discussions are critically important to our time.I thank the great interviewers too, who are asking meaningful questions. 4 Think of your favorite poem or song lyric. What is it, and why does it speak to you?Talk about rabbit holes! Theres rarely a time in the day when Im not listening to music, whether its classical (Im listening to Chopin while typing this), rock, hip-hop or electro and everything in between. So, lots of favorite song lyrics immediately rush to mind, but heres the first:Go With The Flow by Queens of the Stone Age: I want something good to die for, to make it beautiful to live.As for poems, one of my favorite quotes is from Thoreau: The cost of a thing is the amount of what I will call life which is required to be exchanged for it, immediately or in the long run. Though I also appreciate the widely circulated, more concise variation of it: The price of anything is the amount of life you exchange for it.The beauty of poems and lyrics is that they are left to interpretation and fit snuggly with the interpreters journey. 5 What is the book that influenced you the most? Why?Kahlil Gibrans The Prophet has influenced me the most because he masterfully touches and teaches on all facets of life. Further, every word within the book is potent and powerful. Ive read this book several times and have realized something new each time.I super appreciate minds that can create, construct and communicate value in a thoughtful, tightly crafted and artful way. The classics, broadly speaking, do this zero fluff or filler. And this is important because of the Thoreau quote referenced above. 6 If you didnt need sleep, what would you do with the extra time?Not needing sleep would be an absolute superpower. Im one of those people who needs a solid eight hours of sleep each night, while I always wished I only needed five or six hours per night. Those additional hours have mega compounding potential. Id do more of everything that contributes to evolution: work, read, write, listen to podcasts, get together with friends, exercise, travel all the things.Not needing sleep would also make international travel way more manageable. And as someone who loves to adventure the world, this would be a game changer.